The enchanting circus Cirque du Soleil is returning to town! This will be Cirque du Soleil’s third show in Norway: they performed their show Delirium in 2007 and sold out both nights in Oslo Spektrum. The second time around they had extended their stay and performed Saltimbanco during 4 nights in October 2009 (I believe they also had one or two shows during daytime during the weekend). Now they are returning again with Alegria in the end of February/beginning of March 2013.

Here’s what Wikipedia has to say:
«Cirque du Soleil (“Circus of the Sun”) is a Canadian entertainment company, self-described as a “dramatic mix of circus arts and street entertainment.” Based in Montreal, Quebec, Canada, and located in the inner-city area of Saint-Michel, it was founded in Baie-Saint-Paul in 1984 by two former street performers, Guy Laliberté and Gilles Ste-Croix. Cirque du Soleil put a lot of work into the music, props, costumes and choreography in every production.» (Wikipedia)

In 2007, I totally surprised my wife with Cirque du Soleil’s show “Delirium” at a scene called Oslo Spektrum. She had no idea what we were going to see before we were sitting in our seats! The tickets were costly, but her reaction was priceless!

A year or two prior to the show we had downloaded some torrents/DVDs with Circque du Soleil from www.ThePirateBay.org, so we gladly paid the price to see them live. Actually, if it weren’t for the torrents that I downloaded, there’s a possibility that we wouldn’t have known about them or bothered to spend a lot of money to see their show live.

The first time around the price was 600 (Norwegian kroner) per ticket (1200 for both), the second time we decided to sit closer to the stage and paid 2000 all together. This turned out to be a bad idea and NOT worth  the extra money. Why? We sat on the fourth row from the stage, which is pretty close, but when you’re this close to the stage your seat is placed on the flat concrete floor. It’s just fucking annoying, especially when there’s a tall woman in front of you on row 3, with a kid on her lap. You don’t want to pay thousands to stare in the back of some random womans head (after all you can do this every morning nearly for free as you’re commuting to work). Luckily, there were some available seats on row 5 (which is elevated) and ironically the cheaper tickets had a better view, so we moved over as soon as there was a break (kind of like the Favelas in Brazil and the slums of Peshavar, were the poor people have the best view).
Sitting on fourth row reminded me of some tragic, Norwegian Village Cinema were you sit on foldable chairs on a flat floor in the gym of the local primary school or something like that.

So, if you’re planning to go see the next show in Oslo Spektrum and you don’t like to stretch your neck for two hours: make sure you don’t get tickets on the 3rd or 4th row!

Note: When we bought tickets for the show in 2013 I noticed that the ticket system for Oslo Spektrum had been changed – now it wasn’t possible to pick your seats from a digital map (like you used to be able to do, and like you can do at all the cinemas), so to make sure we didn’t end up on the floor, I went down to the ticket office, got my tickets and told the guy that their new system sucked ass & balls – He totally agreed.

I no longer remember the details from the previous shows – I only remember that is was fucking awesome! According to my own notes and after having refreshed my memory via the internet, I can reproduce some of the impressions and facts of Delirium in 2007: Delirium was a show that was based on multimedia and the theatrical parts consisted of remixes of existing Cirque du Soleil’s music and performances. The show was choreographed by Mia Michaels (who you may remember as a judge on the U.S. TV show «So You Think You Can Dance»?

Unlike other Cirque du Soleil shows where the musicians are on stage but largely out of sight, the musicians in Delirium played an active role in the show.

Unfortunately, the music wasn’t as mysterious and captivating as it tends to be in their shows, but this is probably due to the fact that the music consisted of remixes. They had also added vocals to  some of the music – not a very good choice if you ask me.

The music plays continuously during Cirque du Soleil’s shows, and helps to create and reinforce the magic and drama that so often occurs. The acrobatics are – more often than not – breathtaking, and if you during the show take a sneak peek at some of the other viewers, you’ll most likely see wide-open eyes and mouths. That’s how impressive these shows are!

Saltimbanco – to jump on a bench

Here’s a clip from Saltimbanco:

Delirium was, as mentioned, more music-based than the other shows of Cirque du Soleil where you usually follow a story from beginning to end and where the narrative plays a greater role than the choreography. Saltimbanco comes from the Italian “saltare in banco” which, according to rumors,  means: “to jump on a bench”. 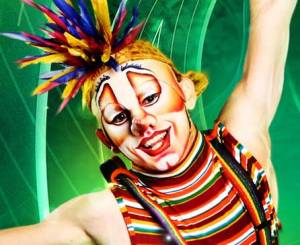 Saltimbanco explores the urban and its myriad forms: the people who live there, their distinctiveness and equality, families and groups, the hustle and bustle of the streets and the stupendous height of skyscrapers. When it comes to busy streets and skyscrapers, the citizens of Oslo will have to rely on their memories from a trip abroad, or their imagination, because you won’t find any of these in Oslo:  ‘Trygge Oslo, stygge Oslo’ (‘safe Oslo, ugly Oslo’) like the Norwegian musician, junkie, alcoholic and poet named Jokke once said.

After Saltimbanco, my wife said that she thought: «it was fine. The previous show had more effects and was more fascinating, but this show was very colorful and humorous. The thing I like about Cirque du Soleil is that every show is different and surprising».

My opinion is that Saltimbanco lacked the great acrobatics I associate with Cirque du Soleil, but the acrobatics that were in the show was performed well. The scene in Oslo Spektrum is also a bit too small for any major stunts.

Particularly I enjoyed the part with the balancing bike, and the part where they used a swing to jump and bounce of each other. Also the part where two men balanced on each other. The costumes were artistic, colorful and bright, but I couldn’t catch the story of the show (was there even a story to it? – According to some stuff I read Saltimbanco was supposed to:

«take the spectators on an allegorical and acrobatic journey into the heart of the city by means of a visual vocabulary   and baroque, eclectic characters – an imaginary city where diversity represents hope»

Where the hell did the publicist come up with such bullshit? And why didn’t anyone stop him…? Also, on the negative side: the show had too much pantomime – probably hilarious if you’re 5 years old or a retard.

Anyway, even with the negative things that I’ve mentioned, both the shows have been worth the money: the acrobatics, the costumes, the music, the dancing – it’s all enchanting and hypnotic!

The best thing about the circus is perhaps the fact that no animals are being harassed and forced to do unnatural things. There’s no animals in their shows, only people. Highly skilled and trained people.

If you ever get the chance: go see Cirque Du Soleil – I’m already looking forward to see their show Alegria.
You can check them out on their website:
http://www.cirquedusoleil.com (warning: flash-based website)
or look them up on YouTube or Wikipedia.